When is a spider too sweet to be scary?.....  When it is a yummy chocolate truffle! 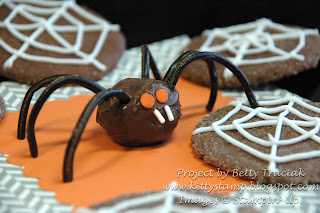 Leah makes the best and easiest truffles so when we saw the idea for these spiders and cobwebs in a book called Cookie Swap we decided to adapt it using her recipe.  (The recipe is on this past post).   The legs are made of licorice and his eyes and fangs are little candy decorations.  The cookies are decorated with piped icing. 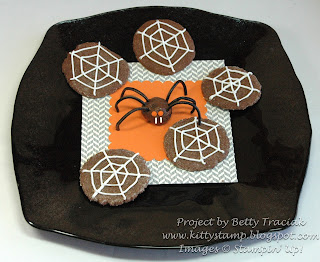 Even though Halloween is just a few days away I seriously doubt there will be any left by then!
Posted by Betty at 10:07:00 PM No comments:

Finally!  A chance to stamp!   I have had the idea for these little halloween candy treats for a month or two.  Now that halloween is just a few days away it was now or never! 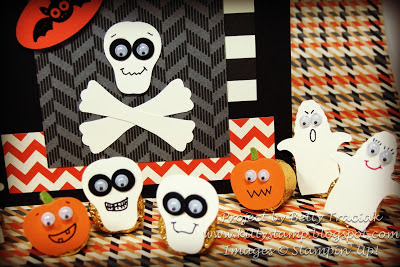 When I get a new product, I love to try to find unusual ways to use them.  The ghosts, skulls and pumpkins are made with the Cannery Set Framelits.  Now the Cannery Set is made to coordinate with Perfectly Preserved stamp set which has a jam jar theme with fruit and corn.   Here a few stamps in that set.

and here they are after die cutting. 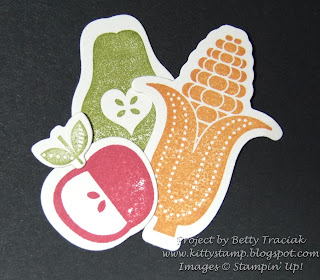 As I was looking the shapes of the framelits, I began to see how they could be used as halloween cutouts as well.  The apple became a pumpkin, the pear flipped upside down became a skull and the corn became a little ghost by cutting off the base. 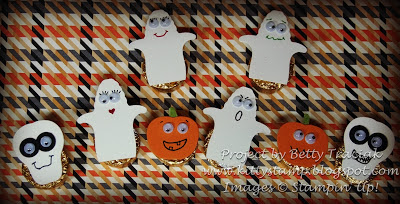 The stick-on googlie eyes in the Holiday Mini were the perfect size for their faces.   I drew eyebrows, eyelashes and other facial features with Stampin' Markers.  I had fun coming up with different expressions. 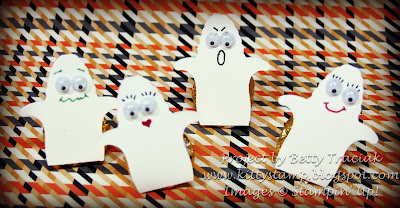 Rolo candies are just the right size to make these into yummy little treats. 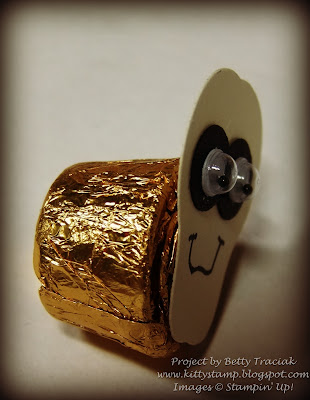 For the card, I added the bat from the Googlie Ghouls stamp set and some crossbones. 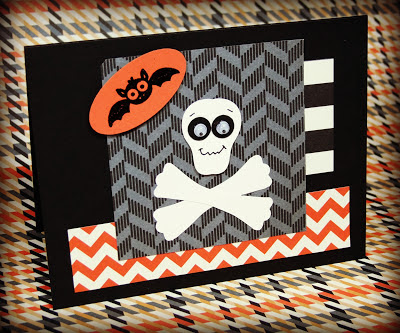 The crossbones are punched with the Modern Label punch and then trimmed a bit on the sides. 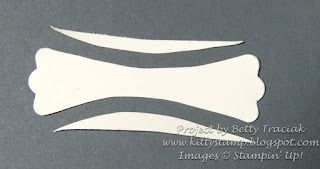 Sure feels good get the creative juices flowing again! 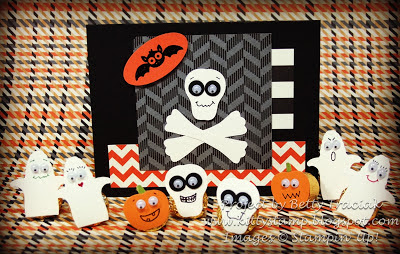 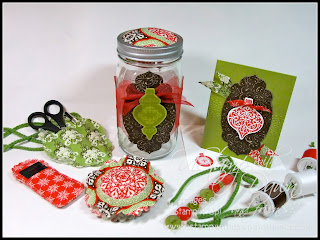 This sewing gift set was my final design project for the Heating Up the Holidays session of UStamp.   It features the Candlelight Christmas fabric cut with various Big Shot dies.    The hanging tool caddy, which holds scissors, seam ripper and marking pencil or stylus, is made with Oval Accent die.  The needle holder is made with the Two Tags die and pincushion with the Scallop Circle die.  It also includes cute packaging for buttons and thread.  It all goes in the jar for gift giving-- except for the card of course!

The live session has ended but all the projects are still available.  The blinkie below has a link for sign up info.

Here is evidence of how long it has been since I have posted. 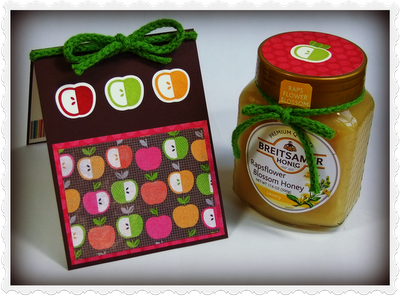 This is a little gift we made in mid-September.  Leah was invited to her friend's house for supper celebrating the Jewish New Year.   Apples and honey are eaten as part of the celebration.  The Orchard Harvest paper and the Perfectly Preserved stamp set were just perfect for this.
Posted by Betty at 11:11:00 PM 1 comment:

To say that I have been busy would be an understatement!  I have been going non-stop for the past month and half with family things and have not stamped once.   In the next few days, I have a few projects to post that I did before I got so busy and I am hoping to begin to create again soon.  I have lots of ideas for the projects using products from the Holiday catalog so I really need to make some of those SOON!

We have been trying to squeeze in some time between all the other things going on to be outside and enjoy the wonderful fall weather.  Our menagerie of critters enjoy the fall too.   Chester, our golden retriever, loves to "help" with the raking.  He waits for us to make a pile of leaves then he dives in head first. 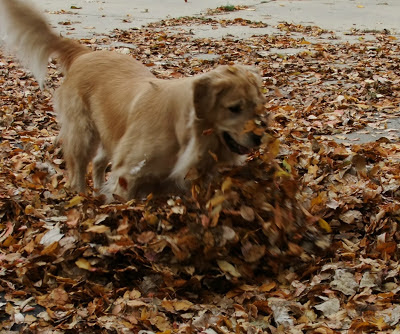 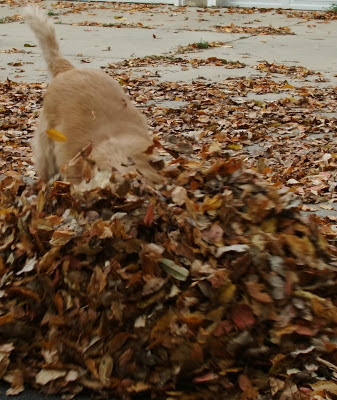 Lupin loves the outdoors too but after an episode where we lost him for a couple of days he is now only enjoying fall through the window.   He is quite a Houdini and tries lots of escape tactics. 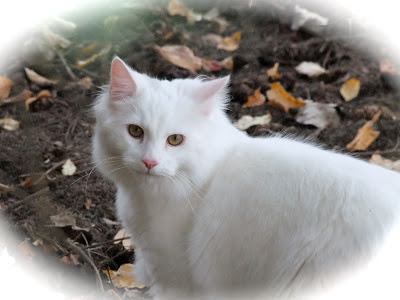 Hopefully, I will be posting soon with some of the fun ideas I have been contemplating.  I think the current Holiday Catalog is one of my all time favorites and I have had the least amount of time to use the gorgeous products!

Betty
Welcome to my stamping and crafting blog. A few years ago I began stamping and have finally found the perfect hobby. I especially enjoy designing unique projects and creating one-of-a-kind gifts for others. I am a Stampin' Up! Demo for personal use only which means I do this for fun not a business. All products are Stampin' Up! unless otherwise noted. Please contact your local Stampin' Up! demonstrator if you would like to order some of the wonderful products. Stamping is my creative therapy; my little piece of alone time in my busy life. I hope you enjoy visiting.

One stamp set... so many ideas! 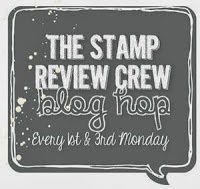